Home/Bat Surveys at Bridges
­
Previous Next

This week we have been surveying bridges for their suitability for roosting bats following best practice methods as described in Billington and Norman (1997). This technique scores the bridge for bat suitability, on a scale from 0 to 3 based both on the nature of the crevices within the bridge structure and any evidence for the presence of bats. Suitable crevices are inspected to check for roosting bats or evidence of their presence.

This allows us to identify bridges which will require further detector surveys and mitigation measures to preserve bat roost features within the structure during any maintenance works. Both bats and their resting/breeding places are protected under law making it an offence to interfere with or destroy a bat roost.

As well as surveying for bats, observations of the presence of other sensitive species and habitats as well as any non-native invasive species are recorded during these visits. In the past week, some interesting finds included Otter (Lutra lutra) spraints, the remains of Dipper (Cinclus cinclus) nests and hibernating Herald (Scoliopteryx libatrix) moths. Hibernating bees have also been recorded. On a couple of occasions, the bees have occupied crevices that were suitable for bats, possibly dissuading any bats from occupying the same crevice. 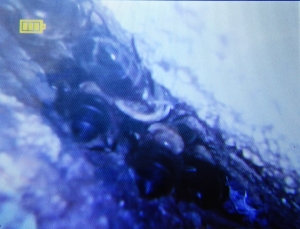