Inis Environmental Consultants have just completed electro fishing surveys at 11 No. bridges in County Donegal during September.  Baseline ecological assessments were conducted to inform the competent authorities on the presence/absence of Annex II species such as Salmon and Lamprey species before rehabilitation works commence on these structures. The photograph shows juvenile Salmon caught at one of the sample sites. Juvenile Salmon can be identified from trout by the deeply forked tail, only 1-4 spots on the gill plate and also the maxillary bone does not extend beyond the centre of the eye. The two top specimens below are likely to be zero plus juveniles while the bottom two fish 1 year plus individuals.  These fish will remain in freshwater for 1 to 4 years, when then they will go through smoltification i.e. turn silver before leaving for sea in April of that year. 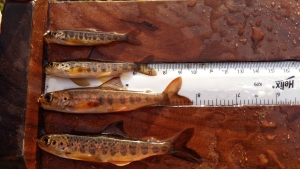